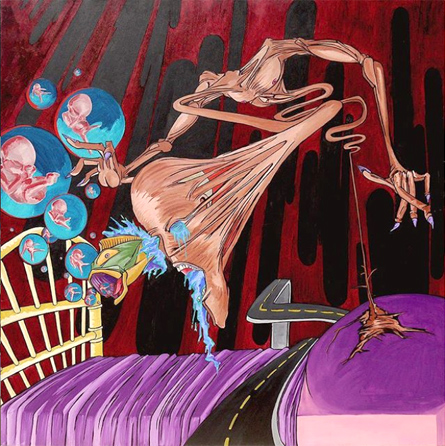 The Art of Joseph Demaree
‍
http://www.josephdemaree.com
‍To create a picture for the mind’s eye to swim in. The visions have always relayed their stories to Joseph Demaree’s imagination. Do you hear the wind’s song? See the cloud’s tale? This push and pull move us to yet another act. The past, present and future conduct each and every element of Nowism. To play within the physical, non physical, timelessness. An Idiomism: A characteristic mode of expression in music or art. As words and time allow groups to establish a popularized perspective. What is the current state of Art? A naked understanding can be dressed up as you please.

Joseph Demaree grew up in San Jose, CA. He attended the San Francisco Academy of Art (1997-2003). Demaree would tour through the United States, Canada, Australia, New Zealand & Japan with many diverse musical projects, ultimately leading to a music and art show know as “The Unit Breed” (1998-2009). He relocated to Portland, OR in 2004.

He moved to St. John USVI, moved back to Portland, OR then traveled throughout Mexico. He moved back to San Jose, CA where he created “Welcome Back!”: a cable access TV show (2010-2011). He relocated to Encinitas, Ranchita & Oceanside, CA where he began painting En plein air for Art in the Pines at Torrey Pines State Natural Reserve (2012). Demaree would float in and out of Portland & San Jose. During this time he recorded and released new music under his birth name and showed and toured with new works. Demaree moved to Maui, Hawaii, Nov 2014. Joseph joined the Lahaina Arts Society where he showed and sold his artwork in the Courthouse Gallery, Jailhouse Gallery & Banyan Tree Art Fairs. He taught a kids art class in Wailuku HI for the Lahaina Arts Association and participated in many Artistic happenings around the island. Demaree left Maui Aug 2016 and toured through England, Scotland & Greece creating a series of plein air oil paintings.

He returned briefly to Hawaii to create a plein air oil painting on the Big Island before returning to the Bay Area, CA (Amador City & San Jose). Joseph moved back to Portland, OR. He continued to paint and play music as well as teach kids art for Portland Parks & Rec. Demaree left Portland to tour as a solo musician and paint plein air landscapes (May 9 – July 28 2018). The tour would take him through OR, WA, CA, AZ, UT, ID, HI.

Demaree would settle in LA, Long Beach, San Jose and then Watsonville, CA. He would paint two murals for the Santa Clara County Fair and teach an Art / Mural class for “At Risk Youth” in South San Francisco High for RWCPAF. His latest album “Release Me” (Dec 27 2019) is now available at idiomism.com. Joseph Demaree has currently traveled through Portugal and Spain painting landscapes. He has recently landed in the Algarve region of Portugal.